Now you can have ALL THREE books in ONE seamless novel! That’s right! Books 1-3 are all in this first volume of THE BOOK WAITRESS SERIES…

“Remiel’s stories pull you in, captivate your heart, and make you beg for more.”
-USA Today Bestselling Author, Laura Wright

“Deena Remiel’s Book Waitress Series is a rare find. One part Buffy, another part Exorcist, with an extra large dash of hunky reporter, its bound to wind up on your favorite series list. It’s certainly on mine.” -Rebecca Royce, bestselling author of the Westervelt Wolves.

Camille Dutton, The Book Waitress, learned early in life Satan was not to be trifled with. Escaping his evil clutches as a child, she’s worried he’s come back with a vengeance for her now. She has luck on her side, though. Good and bad. On the upside, she narrowly escaped death and the devil claiming her soul. On the downside, a portal has been opened, and she can feel every time a beast from Hell crosses over to our world.

One creature in particular, a rogue ice demon named Synn, has made it his personal mission to protect her as part of his reformation. Her boyfriend, Derek, and his friends don’t trust him for a minute. Tempers flare, and passions ignite unexpectedly while new problems emerge. Can this fledgling team of demon-slayers rise above adversity, or will Evil tear them apart bit by bit and have its day?

The portal between Hell and Earth is torn asunder, and it will take everything Camille Dutton has and then some to close it. Satan won’t go down easy, but nothing worth everything comes without a price.
The Book Waitress Series is a compilation of 13 serialized novellas paying homage to the TV shows I loved to watch- Buffy the Vampire Slayer, Angel, and Charmed. This volume contains the first three novellas connected seamlessly together into one full-length novel. The next three novellas will be releasing in the months to come and will be compiled into the second volume. 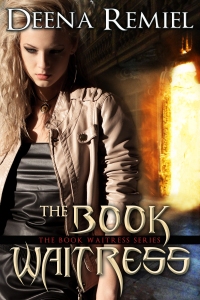 “Watch your step there, young lady.” A deep, raspy voice broke through Camille Dutton’s frantic mind. “Just up those stairs to the upper deck. It’ll be about eight minutes to the island once we shove off. Enjoy your trip.”

“Thank you.” Eight minutes? It might as well be eight years! Ignoring the nausea threatening to erupt and drown the ferry before it even left the dock, she smiled graciously. The weather-beaten gentleman, the deckhand, she supposed, nodded at her with a crinkled smile and ushered the next person onboard. With every step she climbed up the steep metal stairs, she repeated a mantra to soothe unsettled nerves.

It’s not forever. It’s not forever. Finding an opening at the bow of the ferry, she took up temporary residence against the railing, and dropped the heavily laden backpack from her shoulder to the deck. The churning clouds mirrored her dark mood and hovered dangerously low over the expanse of water. Eight minutes of deep, dark wetness would now separate her from the life Camille had known for twenty-four years. She’d never been further than eighty miles from her home. She didn’t need to travel far; not when she had thousands of books at her disposal to take her wherever she wanted to go.

Her involuntary transfer to the Shelter Island Library, or forced exile as she preferred to call it, would last only as long as it took to find a permanent librarian. Her boss had promised, and she vowed to hold him to it. With her parents’ recently passed, she longed to stay in the house where they’d infused her life with cherished moments. This upheaval at work made their absence all the more painful to bear.

Shelter Island seemed the antithesis of its name. Camille had been lovingly sheltered by her parents and insulated within the comforting walls of her town’s library. She’d read all of the books repeatedly, from cover to cover. Going to this unknown town, living in a strange home, and working at an unfamiliar library left her feeling exposed to more than just the elements. It invited all manner of creature born to lay siege on her well-constructed fortress of solitude.

The ferry’s whistle blew as its engines kicked on and thrust the boat into the Sound. She gasped and closed her eyes, pressing fingers against the cold steel that kept her from jumping ship. A gusty breeze whipped her ponytail into a frenzy of curls that slapped at her neck and cheeks. Eyes smarted and watered as a rush of air assaulted her face. She couldn’t bear to watch as her life receded into the horizon. Looking forward was just as painful, and she pondered what lay ahead. 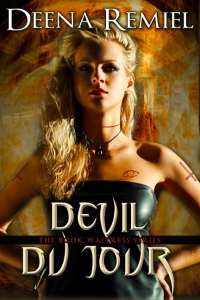 A nurse walked in with a basin, a rag, and a smile. She stood beside her after the doctors left and began cleaning away the dried blood and washed out the wounds. Camille closed her eyes during the procedure, imagining Nurse Chloe as her mom instead.

“All cleaned up and dressed. I’ll send your friend in now, but when the plastic surgeon comes down, he’ll have to wait outside.”

“Thanks.” She managed to offer a weak smile.

A moment alone seemed too much for her. Her heart rate exploded and she shook with irrational fear. She never wanted to be alone again. Derek appeared by the curtain with a scowl that quickly dissolved into a relieved grin. He rushed to her side and scooped her up in his arms, replacing the gurney with himself as her bed.

“Hey, sweetheart, how are you doing? My God, you’re shaking like a leaf. It’s okay. I’m here.” He feathered light kisses on her temple and smoothed away her damp, matted hair.

“I’m all wet still,” she admonished. “You’re gonna get soaked.”

“I don’t care. You’re alive. That’s all that matters.”

“Thanks to you.” She paused and continued in a hushed voice. “You tore me away from ‘You Know Who’s’ grasp. I was nearly gone. He had me. I’ll never forget what you’ve done for me. Ahh!” She grasped at her ears and her body went rigid.

“What? What is it?” He jumped up with her in his arms and put her back on the gurney.

“I can’t bear that screeching sound and my cuts are burning me again! Oh God!” She writhed on the stretcher while he looked on, wide-eyed, not knowing what to do for her.

“What the hell was that all about?”

“I don’t know,” she croaked. “It happened while I was in the ambulance, too.” Before they could discuss things any further, a doctor wearing scrubs, a surgical cap, and mask pushed the curtain aside and gave him the signal to leave. She closed the curtain behind her.

“Hello, Ms. Dutton. My name is Dr. Landry and I’ll be attending to your wounds.”

Something about her voice sent prickles of apprehension across her skin. “Okay.”

The doctor offered her a hospital gown. “Here. It’ll be easier for me if you put this gown on instead of what you have on now. Those gowns are not exam-friendly. Especially for what I have to do. Keep the opening in the front and let me know when you’re ready.” She stepped out, leaving her to analyze why nerves were twitching in her arms and legs.

She took off the other hospital wear, dropped it to the floor, and put the gown on as requested. “I’m ready.”

Dr. Landry stepped back in the curtained area and began her assessment. She opened the gown to reveal Camille’s stomach and whispered. “Ah, my handiwork is holding up well, I see. You’re my finest work yet.”

Derek threw sanity out the window and raced over to the well. He leaned over to see where Camille had fallen, since he heard no splash of water. Maybe she’d had second thoughts, grabbed the side of the well, and was somehow hanging on. There was no sign of her. “Damn it! Camille!”

A thick, braided rope lay beside the well. He looked around, and a tree wasn’t too far. So he grabbed one end and tied it to the trunk, then threw the other end down the well. As he lowered himself down, hand under hand, he prayed he wasn’t too late to save her. Painstakingly he looked around the ever darkening space, but still couldn’t find her anywhere. His feet splashed the surface of the water, and still he continued downward. The rope ran out about a foot above the water line, and he let go.

Diving over and over, deeper and deeper, he felt around the frigid water for her body. She was nowhere to be seen. Reluctant, freezing, and exhausted, he grabbed hold of the length of rope. But he’d seen her jump in! He knew he did. She isn’t up above. She isn’t down here. Where the hell did she… Could she really have gone to … Hell? If so, how could he get there and bring her back? He slapped at the water, frustrated and angry with himself for not stopping her before she leapt. What would be his next steps for a rescue?

With every grab he made on the rope to pull himself up, he thought of the myriad of repercussions that could occur now that she’d sacrificed herself over to Satan. He didn’t believe for one moment that what she’d done would keep Satan away from this world. His power and influence shielded her from the truth, he was sure. Oh, no. Satan wouldn’t leave them alone just because she agreed to go to him. As he reached an arm over the ledge to hoist himself up and over, he wondered exactly what to expect. Hell on Earth, he supposed.

“Come back to bed, Slayer. You’ll catch cold out here in that silky robe.”

The chilled air coated JaxSynn’s voice and lowered its pitch to a deep, sensual rumble, vibrating every nerve across Camille’s skin into a passionate frenzy. She gasped as his hot breath wafted along the length of her neck, and leaned back to find his body eager for hers. As he slid his hands along her ribcage, they behaved like ice packs, sending cold relief to her bruised bones. Pablo’s parting gift would take a bit to heal. He raised her arms to rest against his shoulders, and she closed her eyes, reveling in the sensations as he nibbled her ear.

“Fat chance of that happening. Mmm….” A purr bloomed in her belly and escaped her mouth. “You have me hotter than Death Valley in the middle of summer right now, you wicked demon.”

“Sounds serious. Let me see if I can help.”

He spun her around to face him, and she gazed into eyes smoldering with desire. Untying her sash, the robe fell open, and he grabbed her in a chilling embrace, melding his naked, well-chiseled body to hers, meshing their lips together. Despite his efforts, he couldn’t douse the fires that burned deep inside her. She tore her mouth away, confused by the paradoxical event. It seemed both fire and ice coursed through her body.

“For an ice demon, you set me ablaze. How can that be?”

“It’s a gift.” He flashed glowing amber eyes that faded back to their normal brilliance. “Come inside and I swear I’ll burn you with more.”